“…Without Richard, the team would not have been able to collect the blood that has been required. Many people’s lives – across the whole of the UK – could have been affected without it.”

Back in March, right before the first national lockdown, Richard came along to register with Driver Hire Oxford to help out with some non-HGV work that they were recruiting for. Fast-forward eight months and what a mark Richard has made on both Driver Hire and the local community.

Not only has Richard supported three different Driver Hire National Account customers during this time, but he has also been supporting both the NHS Blood and Transplant Service and the South Central Ambulance Service with their own driving needs.

“The feedback that we receive from clients is always fantastic,” says Maj, Office Manager for Driver Hire Oxford. “Both clients within the NHS ask for Richard as their first choice on any booking, and he has never turned down an assignment.”

When we asked how Richard’s work over recent months had helped the NHS Blood and Transplant Service in particular, Amanda (Regional Lead Nurse) was happy to share her feedback:

“Richard is a very hard worker and goes above and beyond for us. After ensuring that the vehicles are safe and up to standard, driving the team and supplies to venues, Richard is never sat in a corner during his shift, even when the shift goes hours over what was planned. He puts himself in the best place to help the donors and staff with the session, demonstrating great understanding and empathy to everyone he meets. 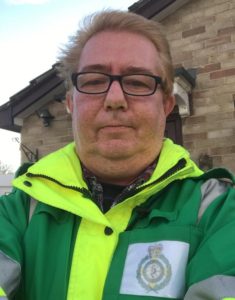 “Without Richard, the team would not have been able to collect the blood that has been required. This would have put extra pressure on the system and other teams.  If blood is not collected then this could affect people’s lives across the whole of the UK.

He puts himself forward for extra duties, is a valued member of the team and he can often be found reminding everyone why we do what we do, offering us all a morale boost whenever we’re in need of one.

At the end of the shift, he drives the staff, supplies vital blood back to the hospital and ensures that everyone is safe and secure before departing for home. We are lucky to know him and we would like to say a massive thank you to all that Richard does for us.”

Not only has Richard shown dedication to his work as a professional and caring driver, but he is also a qualified mechanic and site electrical contractor. “We really do feel honoured to have had Richard working with us throughout this difficult period. He has helped us in a difficult time, during the Coronavirus pandemic, offering unwavering support throughout the first national and continues to support the needs of the NHS throughout the second”, says Maj.