Ed Huzzey, is a life saving, fire quenching hero. Ed, who works for Driver Hire Canterbury, was driving his artic on the A2 heading back to Canterbury when he found himself on the scene of a serious crash involving a car and an HGV. The car had smashed into the back of the HGV with such force that part of the car had gone under the truck. To make matters worse the car was in flames – with the driver trapped inside it. 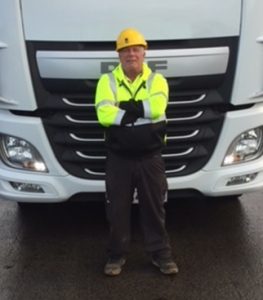 Ed pulled his own vehicle to the side of the road and was quickly ready to assist. “The driver told me his legs were trapped,” says Ed. “I jumped into the car through the rear door and pulled him out. I know you shouldn’t move people in case you cause additional injury, but I thought he was better off alive missing one leg, than burnt and dead. Afterwards I thought it was a bit stupid, but you do what you need to do when you need to do it.”

Having got the driver to the side of the road, who escaped with only minor injuries, Ed then grabbed a fire extinguisher and dealt with the car which was now ablaze. The emergency services were on the scene within ten minutes, only to find that Ed had largely done their job for them. A spokesman for Kent Fire & Rescue thanked Ed for his actions.

Commenting on Ed’s bravery and quick thinking, his boss, Andrew Padgett, owner of Driver Hire Canterbury added: “He’s a real hero – not just for his life saving heroics. Ed is a great bloke and a good driver. What’s more he was back at work next day, as if nothing had ever happened. We’re lucky to have him on the Driver Hire team here in Canterbury.”