Richard Bradshaw, franchisee at Driver Hire Guildford, is in line for a national award. He’s one of the finalists in the 2017 ‘Startups.co.uk’ awards. 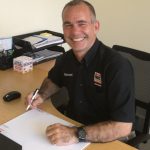 Organised by ‘Startups.co.uk’, the UK’s number one service for starting a business, the awards celebrate inspiring, exciting new businesses launched within the last four years. 2017 has seen a record number of entries with 77 finalists competing in 16 categories. Richard has been nominated for the ‘Franchisee of the Year’ award.

Before buying his Driver Hire franchise, Richard had spent the previous decade working in the hospitality industry in Florida. He moved back to the UK with his family in 2013 and bought Driver Hire Guildford in 2014. As his ‘Startups’ success suggests he got away to a flying start, rapidly increasing both turnover and profitability.

“When I was considering a franchise another reason behind my decision to buy the Driver Hire Guildford business was that, despite it being well established, I still felt there was huge untapped potential in the area,” says Richard. “This has been vindicated as my growth story is continuing; the business is very much on course for another record year with turnover already 26% up.”

The Driver Hire business as a whole has a great past record in this competition; its franchisees at Colchester and Worcester winning in 2013 and 2014, respectively.

Commenting on his nomination, Richard said: “It’s great to have our efforts recognised in this way. My personal investment, in terms of both time and money, ensures that my clients get a service that other agencies find hard to match. It’s about personal care of both my clients and my drivers. My aim is to develop long-term relationships with both.”

Ian Wallis, editorial director of ‘Startups.co.uk’ added: “From tech businesses with global clients to artisan products with a local footprint, all our finalists fully deserve to be celebrated for what they’ve achieved in such a short time. Picking the winners will be a monumentally difficult task.”

The winners will be announced at an awards ceremony in London on November 30th. To find out more about becoming a Driver Hire franchise visit: www.driverhirefranchise.co.uk