This week (November 19th – 25th) is Road Safety Week and all 100 Driver Hire offices are being encouraged to share the message on cutting deaths and injuries on UK roads, making them safer for everyone.

Organised by Brake, the national road safety charity, the aim of Road Safety Week is to raise awareness of road safety issues. Provisional estimates for the year to June 2018 show that there were 1770 fatal accidents, a figure that has been largely static since 2012.

The theme for this year’s Road Safety Week is ‘Bikesmart’; the message is all about making the roads a safer environment for people on two wheels – both bikes and motorbikes. 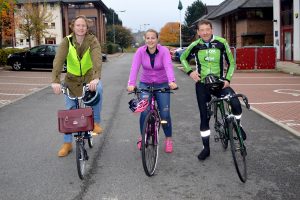 “Figures from Brake show that cyclists and motorcyclists are amongst the most vulnerable road-users,” says Chris Chidley, Driver Hire’s Chief Executive. “On average, a cyclist or motorcyclist is killed or seriously injured on British roads every hour. Compared to car drivers, they face a 63 times higher risk of injury or death.”

Possibly because of the UK’s increasingly congested roads, more and more people are taking to two wheeled transport. Motorbike ownership has risen by almost 60% over the last 20 years; the average annual cycling distance per person is up by 54% on 2002 levels The latter may also have been encouraged by the health benefits of cycling; regular cycle commuters have less time off for illness and enjoy better general health.

Chris Chidley continues. “Getting more people on two wheels reduces congestion, making life easier for hard-pressed delivery drivers who are frequently working to tight deadlines. Of course it’s important for all road-users to look out for each other, whether you’re on two wheels or four, not just during Road Safety Week, but 365 days a year.”

Adele Turner is a National Account Manager at Driver Hire. A regular weekend cyclist, until Road Safety Week she’d not tried a rush hour commute by bike. With guidance from two seasoned cycle commuter colleagues, Adele decided to give it a go. “I feel that there is a general lack of awareness of cyclists by other road users. Cars tend to get closer than they should; people park in cycle paths forcing you out into the main flow of heavy traffic. On the Cycling Super Highway there were a number of occasions where motorists didn’t even look before pulling out and then seemed totally surprised to see us there! On the plus side, I did actually feel the benefit of the commute as I was definitely more energised and alert for the day ahead.”

Find out more on what Adele thought about her first cycle commute here.