Driver Hire Grimsby and Scunthorpe is in the finals for this year’s Northern Lincolnshire Business ‘DFDS Excellence in the Community’ Award.

The award recognises companies who have demonstrated commitment to their local community and displayed evidence of being a ‘good neighbour’. Driver Hire’s nomination is well deserved. Since buying Grimsby and Scunthorpe two years ago, franchisees Michael and Jayne Anne O’Flynn have run a number of community–based events and fund-raisers. This is their second consecutive appearance in the finals. 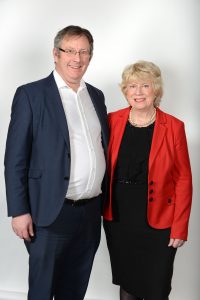 The judges noted that last year Driver Hire sponsored Havelock Academy, the Golden Apple Awards, Finn Hunter-Johnson’s Ninja Kart and ran a golf day, raising over £5,500 for children’s charity ‘When You Wish Upon a Star’. Jayne has also attended many local events as guest speaker to share her inspiring stories and business insight. She will be talking to students at Havelock Academy on 28th March as well as delegates at Work Wise Women (WWW) event on 24th April.

Jayne was awarded the WWW Grimsby ‘Business Woman of the Year’ award in July 2017 and has a long history of supporting charities. For 16 years, Jayne has worked with ICAP (Immigrant Counselling and Psychotherapy), the mental health charity based in Finsbury Park, London and has also been a Trustee of the late Richard Mills Foundation supporting Autism.

This year they’re setting the bar even higher with their local fund-raising efforts, aiming to hit the £10,000 mark with another golf day in June. Funds raised will again support the ‘When You Wish Upon a Star’ charity, potentially buying 25 seats on the ‘Santa Express’, helping create a day to remember for children suffering from life-threatening illnesses.

After receiving the news of their nomination yesterday, Jayne commented, “We are absolutely over the moon to be recognised in this category. Community engagement is very important to us. As a local business we’re in a position where we can help and have a positive impact. It’s certainly something that’s very close to our hearts.”

The Northern Lincolnshire Business Awards 2018 will be held at Grimsby Auditorium in Grimsby on Friday 18th May where the winners of all fourteen categories will be announced. Take a look at the NLincsBA website for further details about the awards and nominees.