At Driver Hire Bolton & Wigan, Andy Daniels, has taken over as franchisee from Iain Westman. Andy joins a burgeoning number of Driver Hire employees who, when the opportunity presented itself, bought the business they worked for.

Andy, who has been a key member of the Bolton team for over a decade said: “When Iain told me he was selling I decided that rather than help someone else to profit from its success, I’d do it myself. Both myself and the rest of the team are really looking forward to continuing to deliver a market leading specialist recruitment service to local businesses.” 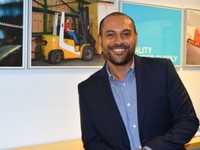 Meanwhile, Mike Moores has sold his Manchester North & Oldham business to Jamie Lamptey. Jamie (pictured) is a newcomer to the Driver Hire network. He does however have in-depth knowledge of road transport and logistics having spent the last 18 years working in the industry. Most recently he was a contract manager for a national contractor specialising in road tankers.

Commenting on his decision to buy his own business, Jamie said: “I felt it was time for a change and self-employment attracted me. In my previous job I regularly worked with driver recruitment agencies; that made me realise the important role they play in the smooth running of a transport operation. A Driver Hire franchise attracted me because it’s a strong brand with an excellent reputation. That gives me plenty of opportunities to grow the business.”

Mike Moores will continue to be part of the Driver Hire network, as franchisee of Driver Hire Manchester South.

Graham Duckworth, Driver Hire’s Franchise Sales Director added: “It’s certainly been all change. In addition to Andy and Jamie, we opened a brand new office covering Manchester West earlier this year. But it’s not just in the North West where there is strong demand for our franchises. We’re close to completing resales for Driver Hire businesses in the Midlands and South East England too.”