Driver Hire is much more than the UK’s leading specialist transport & logistics recruitment company. We’re also one of the UK’s top franchise businesses. A fact that was clearly evident at the 2018 bfa HSBC Franchise Awards where Driver Hire came home with bronze in the ‘Franchisor of the Year’ category.

This was the 12th time in the last 13 years that Driver Hire has been a finalist, and now fives times award winner. Olympic and world track cycling champion, Chris Hoy, presented the awards which took place at Birmingham’s International Convention Centre. McDonald’s Restaurants claimed first prize. 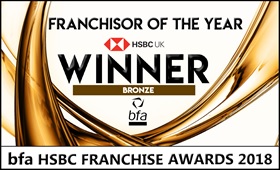 “Widely respected, these awards recognise both franchisors and franchisees who have demonstrated outstanding business acumen, innovation and achievement,” says Graham Duckworth, Driver Hire’s Franchise Sales Director. “Clearly we’re delighted to be on the podium again. The judges were impressed by the support we give to our franchisees and the entrepreneurship demonstrated by our franchisees. As a result we’re on course for another record year, our sixth in succession. Winning this award is a great advert for us and a ringing endorsement of the strength of Driver Hire’s highly successful business model.”

Pip Wilkins, bfa CEO, added: “I’d like to thank all of this year’s finalists and congratulate our winners. It was an extremely hard job for the judging panel to separate them.”

Andrew Brattasani, from award sponsors HSBC said: “Franchise businesses show people that want to go it alone, even if they haven’t got a strong business idea; they can still run their own highly successful business.”

To find out more about franchise opportunities in the UK with Driver Hire visit our franchise website.