Driver Hire’s UK Managing Director, Jeremy Neale, recently showed that he’s equally at home doing a spot of painting and decorating as he is managing one of the UK’s leading specialist recruitment companies. 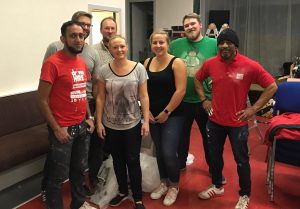 Jeremy was a member of a team from Driver Hire’s Bradford head office who took a day away from their desks to redecorate the function room at the Dominica Association. “The Association celebrated Dominica’s 40th independence anniversary on November 3rd,” says Jeremy. “To mark this noteable achievement the Association hosted a major party. To ensure it was looking at its best we took a day out of work to give its function room a fresh lick of paint.”

Home to the Bradford Dominica Association, the Centre – which is on Worthington Street in White Abbey – was established in 1979 and will celebrate its own 40th next year. Originally it was a hub for people who’d moved from the Caribbean to the city. Through the Association, the Centre continues to raise funds for ongoing rebuilding on the island following the September 2017 hurricane.

These days the Dominica Centre is also an important community facility open to everyone, as Centre Manager, Gary Serrant explains: ”It’s used by a variety of groups and every Wednesday and Thursday throws open its doors to the 55+ age group offering lunch, keep fit and other activities as well as an all important opportunity to socialise.

“The Driver Hire team did a fantastic job. All of our senior members love the transformation and have commented on how good it looks. It all helped play a part in what was an amazing weekend to mark our 40th. It started with a reception in City Hall attended by a representative from the Dominican High Commission in London and culminated in a party for 150 people at the Centre.”

Jeremy Neale added: “With the help of Volunteering Bradford, Driver Hire has been involved in a number of local volunteering projects over the past four years. Everyone involved thoroughly enjoyed their day at the Centre. It was good to turn our hand to something quite different from our normal work routine whilst making a positive and much appreciated contribution to the local community.”